The Most Valuable Silver Half Dollars and Their Values

There was a time when silver half-dollars where everywhere. People carried them around in their pockets and purses, and they were more popular than paper money. They were more popular than silver dollars, due to their more compact size and weight but high value. Sadly, in 2002, the U.S. Mint decreased the production of silver half-dollars, leading to a decrease in their circulation.

What is a Silver Half-Dollar? 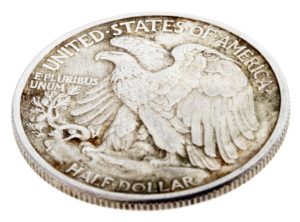 A silver half-dollar is a coin worth 50 U.S. cents, or half a dollar. First minted in 1974, these coins saw heavy use for the first half of the 20th Century, including in many casinos where they were the coin of choice. Until 1965, the value of the silver bullion wasn’t as valuable as the coin itself (less than 50 cents of silver was used).

However, by 1965, the value of silver had risen to the point that the U.S. Mint began to introduce coins with a much lower silver content, which contained more cupronickel and copper. Between 1965 and 1970, the silver half-dollar only had about 40% silver.

By 1971, the composition of the half-dollar was changed to match that of the dime and quarter. No longer are half-dollars made of silver—instead, they’re made from 91.67% copper and 8.33% nickel. This means that silver half-dollars produced before 1964 tend to have a much higher value than their modern counterparts.

[su_note note_color=”#e2ae00″ radius=”0″]Silver half-dollars are no longer available from the U.S. Mint, so they are much more rare than modern silver dollars.  Even now, modern half-dollars tend to be produced only for collectors rather than for commercial use. For collectors, a silver half-dollar is often worth more than a proper dollar, due to its scarcity.[/su_note]

The Most Prominent Silver Half-Dollars

Here are a few of the most prominent silver half-dollar coins:

The Capped Bust silver half-dollar was produced from 1807 to 1839. The Lady Liberty portrayed in the Draped Bust half-dollar has a Turban on her head.

The Seated Liberty half-dollar was made between 1836 and 1891, and is one of the most common of the half-dollars. It features the Goddess of Liberty in a seated position, holding a Liberty pole. The coins bear the mint marks of New Orleans, San Francisco, and Carson City, where they were minted. These are one of the most popular coins for collectors.

Of course, these are the most important of the silver half-dollars. There are a few that may not be as common or prominent, but have a higher value (due to rarity or minting mistakes). Here are the highest-valued silver half-dollar coins:

[su_note note_color=”#e2ae00″ radius=”0″]If you’re looking for a good investment, these rare half-dollars are definitely worth considering. Or, if you have a coin collection you’re interested in selling, you may want to check your collection to see if you have any of these.[/su_note]

What is the Value of a Coin?

[su_spacer size=”15″]
If you were to melt a coin down for its metal value, you could get a few bucks for each silver half dollar. After all, with the high price of silver, you can make money selling the metal. Any coin from the Kennedy half-dollar to the Barber half-dollar is worth around $6.50 in melt value.

On the other hand, if you have the coins, it would be a waste to sell them only for melt value. Remember that a lot of silver half-dollars are collector’s items, so you can earn more money by selling the coin to a collector who is interested in their collector’s value rather than simple melt value.

Why You Need a Professional Appraisal

This is where a professional appraisal comes in handy!

You may have these coins in your safe or storage, perhaps passed to you by your parents or grandparents who collected the coins. You may see them as a cute piece of memorabilia or even a worthwhile investment. Either way, you should always find out how much the coins are worth before trying to sell them.

Let us help you. Twerys specializes in rare and valuable coins, and we’re happy to help you figure out the value of your coin. We’ll give the coin a thorough examination to test everything from its metal composition to its appearance to any existing damage to the coin. We have records of all the most popular coins, as well as the rarest, highest-valued ones. We’ll give the coin a thorough exam and give you the most accurate valuation of your coin possible.

In the end, you could find yourself holding something worth a lot more than you expected. That old coin may actually be worth a pretty penny. With our help, you can know exactly how much your silver half-dollars are worth.

A silver half-dollar is more than just a beautiful coin—it’s a piece of history! You should be interested in finding out how much it’s worth, not just because you want to make money selling it. A piece of American history is definitely something to keep, and it can be a good back-up plan in case you need quick cash. Let us help you find out exactly what the coins are worth!

What did you think of this article? Is there any more information on the subject you’d like us to share or you would find helpful? Leave a comment below and share your thoughts, questions, and feedback. We’d love to hear from you!